CRYPTOPORTICUS PRODUCTIONS is a transmedia venture, dedicated to revealing such underground connections among the control mechanisms of modern society.  The cryptoporticus is also a vault in which are stored the secrets of cultural continuity - a failsafe for human survival technology. 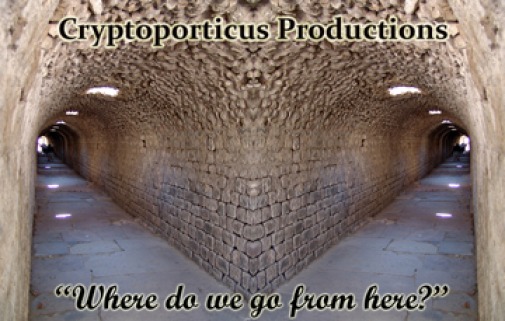 THE CRYPTOPORT 2010: In ancient Roman architecture, a "cryptoporticus" was a labyrinthine underground passage connecting all aspects of cultural life. Only partially at groundlevel, it supports a vast concealed architecture that communicates in secret among its numerous different centers. It is a matrix of nexus points. Many examples are found across Europe, but similar tunnels exist throughout Washington D.C. Literally, carved in stone, such large underground passageways are analogous to today's underground bases, SAC, hardened survival bunkers, book depositories, archives, seed vaults, etc. The labyrinthine convolutions of today's challenges mean we need to learn how to make our way through this tangled maze to "the Light at the end of the tunnel." These holographic or virtual tunnels can be 'mined' for their informational value, helping us choose which way to go.

We produce short socially-responsible documentaries on a variety of subjects about which we have first-hand knowledge. We demonstrate the value of such insider POV (points of view), and can direct and consult with production companies wishing to co-adventure, taking our content, proprietary knowledge and expertise to the next level of development and marketing. We have many rich themes ready for development.  We are open to artistic and technical collaborations in visionary telecommunications, upon request and review. Our aim is social impact programming that awakens us, gives our beliefs a reality-check, and move us toward proactive change from the grassroots to global level. 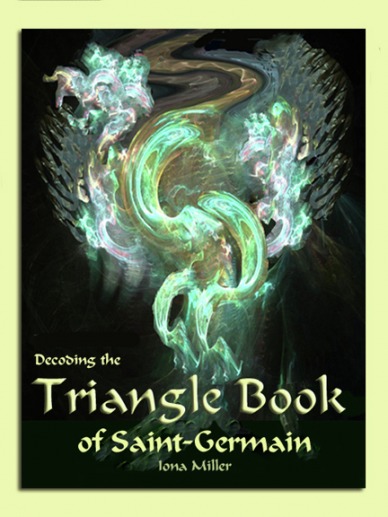 http://trianglebook.iwarp.com The Dragon is the symbolic superstar of Saint Germain's secret grimoire. Find out why and what it means. St. Germain had The Secret, a legacy of Manly Palmer Hall and his Philosophical Research Society (PRS). It was the supreme treasure of his vault. It now resides in the Getty Research Institute, likewise deep in their library vaults. Revealed here are unseen photos of the sigils, emblems and ciphers of the book. This master adept, called the wisest in Europe, reserved his greatest gift, the two books he wrote, for his wisest companions. St. Germaine recorded his version of The Secret to health, wealth and long life in his legendary TRIANGLE BOOK. St. Germain was an alchemist renown for his longevity and youthful appearance. Alchemy begins and ends in the quest for eternal life. It is a spiritual technology of rebirth using natural methods that in their effect transcend nature by amplifying that which is immortal within us. It does not exist in nature but must be prepared by Art. Art is a form of manifesting, making and objectifying the world - spiritual physics. Today, we might describe this resonance as accessing energy that regenerates the mindbody. Healing is an aspect of creativity; nature is within and without us. The Magus does not dominate reality but develops embodied psychophysical equilibrium, clarity, wisdom and compassion.

AFTERSHOCK: In HARMS Way (Operation Bolt On
"The Haitian Earthquake Was An Act of GOD - Gold, Oil & Drugs"

Conjecture about environmental warfare mounts as suspected "crafted disasters" are added to the rhythms of the Long Crisis of Permanent War. Anomalies seen in the sky, in weather, and tectonics spur connect-the-dots theories which have no chance of being proven, due to their highly classified issues. Tectonic weaponry is a known potential but is it being tested and targeted, experimentally and practically?  Some claim the Norway spiral is linked to torsion physics and intensional tectonic warfare. The potential of kindling tsunamis with bombs was tested in New Zealand in WWII.

TECTONIC DOMINO EFFECT: Ionospheric heaters, like HAARP and other large antenna-arrays use radio waves for communication and modification of the electromagnetic environment. In a similar fashion, longitudinal Tesla waves or scalar waves can be deployed at a distance, targeted like ballistic missiles. Did that happen in Haiti whose vast untapped reserves of gold, oil and potential drug trade after the end of the War on Drugs have become irresistably lucrative to the PTB (Powers That Be)? The same techology that canimage buried treasures can rock your world. Was Haiti in HARMS way? (HARMS -- HIGH AURORA RADIO MISSILE SIGNAL).

Text at http://ionamiller2010.iwarp.com/whats_new_30.html Ionospheric heaters, like HAARP and other large antenna-arrays use radio waves for communication and modification of the electromagnetic environment. In a similar fashion, longitudinal Tesla waves or scalar waves can be deployed at a distance, targeted like ballistic missiles. "The Haitian Earthquake Was An Act of GOD - Gold, Oil & Drugs"


THE OSBORNE EFFECT: Black Man In the CIA
© Leutrell Osborne, Sr., 2010
"The Spook Who Sat By the Door" meets "The Company"

He dreamed of being a Spy Manager from the time he was twelve years old and his mother worked at CIA. Set against the backdrop of real events, the inspirational story of this CIA Cold Warrior breaks the mold and explodes public notions about CIA Case Officers, Covert Action and The Company. Characters include those who mentored Osborne at CIA, his rivals and opponents, his recruits, his family, and a host of friends each with their own roots in American history.

A dreamer, a family man, and “a spirit in human form on planet Earth,” Leutrell Osborne, Sr. was involved in some of the most exciting chapters of the Espionage Enterprise and global history. He lived to tell the adventurous tale. His 26 years of bold service at CIA spanned several Directors and Presidents, as well as pioneering contributions in a variety of field and administration assignments on several continents. His adventures included service in a Far Northern Country, paramilitary exploits, bugging an Embassy in a Latin American Country, taking the lead on the “Libyan Show,” running SIGINT signal intelligence in the Far East and being a Transformation Agent.

Osborne had the opportunity to meet politicians, notables, and spiritual leaders, such as Dr. Martin Luther King when he accepted his Nobel Peace Prize. He continues to work with Civil Rights leaders and insider watchdog investigators. His “grinds” include what he calls the “Triple K Assassinations,” domestic covert action of the COINTEL Factor, 9/11 pre-knowledge, blowback, foreign Covert Action policy, transnational drugs and money laundering, and more. He’s still on a mission, but from God. Spirit is his main motivator.