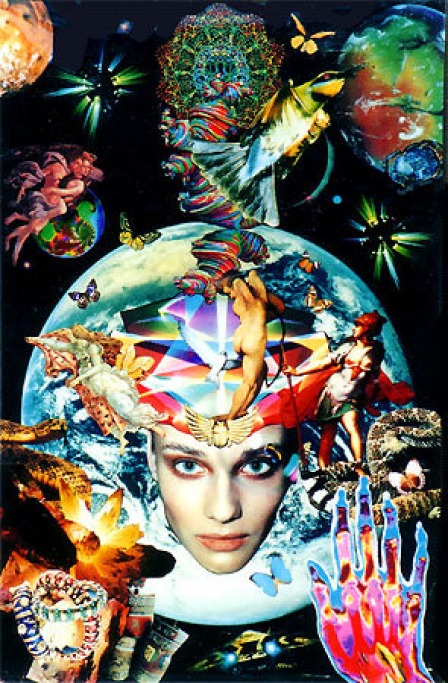 "The future's already here, it's just not evenly distributed yet." –William Gibson

‘We expect artists as well as scientists to be forward-looking, to fly in the face of what is established, and to create not what is acceptable but what will become acceptable . . . a theory is the creation of unity in what is diverse by the discovery of unexpected likenesses. In all of them innovation is pictured as an act of imagination, a seeing of what others do not see . . . “creative observation.” (Bronowski, 1958).

ABSTRACT: Glocalization proposes both theory and practice for bridging global/local scales in an alternative equitable international system, using a mosaic of committed key actors in the physical and electronic environment. McLuhan called the environment a programmed teaching machine. The meaning of globally accessible information becomes organized in its local context as coherence. Intense local and extensive global interaction is a dynamic that operates in fractally embedded spatial and cultural dimensions. It mobilizes social and economic interaction at the local, national and transnational levels, igniting our active responsibility for future generations.

A potential movement, a peace-building activity combining realism and idealism, glocalization is a bottom-up view of the complex process of harmonizing local and global needs for sustainable futures. It brings globalization issues down to the human scale, linking committed local and global social actors.

INTELLIGENT NETWORKS: The immediate goal of glocalization's scale-relativity is practical development of pilot projects and best practice exemplars and policies that can be applied in many if not all areas. It includes proposals and concrete initiatives that promote balance of local and global dimensions via information sharing on a global or transregional basis. The purpose of aspirational futuring is not to predict the future, but to audaciously improve it. Wiser futures require trend identification and scenario development. Scenarios embrace and explore uncertainty in conceptual frameworks.

By adhering to a mechanistic worldview, Western civilization is on a path to extinction, says Science-Art philosopher Robert Pope. The ancient knowledge passed on by the Greeks upheld a survival science, a “Savior science” that was misinterpreted by Leonardo da Vinci but was privately understood by Isaac Newton. Da Vinci by “inadvertently” obscuring the “principle of creation” helped bring into existence a mechanistic mindset that is now accelerating a global crisis of destruction. He presumed all of the universe could be made visible to human perception, and yet the Greeks, and other ancients before them, identified with a universal reality in which harmonious, invisible atomic movement generated divine wisdom.

Trends identify key forces shaping the future. Environmental scanning includes global, local, political, economic, technological, environmental and social trends. Scenarios map plausible and visionary space. Roadmaps help us visualize strategies and collaborative foresight, which evokes collective visualization. Paradigms are the assumed truths of our logic. Acceleration is built into the physics of the universe. We can draw from the organic metaphors of quantum physics, field theory, and chaos theory to illuminate the state of the arts.

We propose a negentropic paradigm for the valuecosm and governing principle of ecological development. Negentropy (or syntropy) is an organizational drive. ‘Edge’ artists as strange attractors are a source of negentropy in society, catalysts of contemporary life. Who but "outsider" artists are "outside the box" of convention? They are beyond traditional peer review, because their peers are not equipped to comprehend and evaluate their contributions.

Artists magnetically draw the attention of others to their creations, to their vision, into the imagination, into the collective future. We might think of them as the ‘indicator species’ of the social ecology, the evolving cultural landscape. Orbiting far from the norm, they provide a negentropic counter-balance, an evolutionary burst, social innovation -- to conservative forms and institutions, which tend to ossify leading to stasis and decay.

Art changes the way people perceive reality, how they see life and their place in it. These negentropic innovations become embedded in social structure. Realizations, insight, empathy are implicit. They show us windows of prescient emotions and impulses, their unframed works rending the veil of the human unconscious.

Physics describes the interrelationship of chaos and order as field relationships, while chaos theory describes nature's own methods of creation and self-assembly. Entropy is the tendency for any closed part of the universe to expand at the expense of order. It is a measure of randomness and disorder -- chaos.

In open systems, negentropy is the life-promoting generative force of the universe. It is the mobilization of our creative potential with cascades of positive results. Negentropy (emergent order from chaos) is a nonlinear higher order system, a dynamically creative ordering of information. Life feeds on negentropy. It is syntropy of free energy and organization. Complex systems can explode into higher forms of order and involvement -- phase transitions to networked consciousness and intelligence.

Life is a survival-supporting negentropic pump. Thinking, science, and art are therefore neg-entropic. Negentropy, like art –as in the painting below, is ‘in-form-active.' It is related to mutual information exchange and meaning. Information is embodied in the fractal nature of imagery and symbols, which compress the informational content of the whole. Opportunities are fractally reiterative instants and situations, openings for unpredictable synergy, quantum leaps -- chance and choice. The better we understand complex arrangements, the better we understand and cope with what is going on.

Creativity is an emergent phenomenon patterned by strange attractors, which govern the complexity of information in dynamic flow. If you can't see how to use continually less matter, energy, space, or time (physical resources) in your scheme to improve human performance, then you aren't operating at the ‘leading edge’ of the tidal wave—somewhere else on the planet things are flowing much faster and more efficiently, and will soon change your game. How can we give people a choice as to which values they want to maximize first, so that different cultures can take different paths toward an inevitably faster future?

This painting is described by an extract from Robert Pope's diary, which reads: `I drove from Port Macquarie to Tamworth in New South Wales and crossed the Great Dividing Range. As I ascended the steep slope of a mountain and as the valley mists parted, Pope writes ‘I glimpsed in my mind the vision of a majestic craft being propelled by the living power of beauty’ - the mighty neg-entropic yin motor of the aesthetison. Such a motor works on the opposite to our existing explosive yang motors such as the internal combustion or explosion based motors.

The yang motor operates on vacuum technically speaking thus creating a vacuum ahead of the craft cp. an explosion behind the craft as in the case of the yang motor. Thus the craft [some would suggest this motor already exists and may power interstellar flight in future] moves into the vacuum ahead of it. Humankind would not only survive, Pope writes, but would make that joyous voyage into the realms of the timeless existence, which it hungers for and dreams of. Something in the beauty and shape of the mountains held the secret of this new technology, just as surely as a moving lodestone once held the secret to the electric motor. Pope, R. and R. Todonai (1988). Two Bob's Worth. Loxton, SA, Science-Art Research Centre. Pg 70-71.

Can we formulate tailored local responses to growth imperatives from the inevitable forces of globalization? A combination of 'Globalization' and 'Localization,' Glocalization was first used by transnational corporations to mean a global marketing adaptation strategy. This corporate "buzzword," a top-down view is NOT what this view is about. Joining negentropic vortices in global networks is a closer image.

Milton Friedman defines glocalization as "the ability of a culture, when it encounters other strong cultures, to absorb influences that naturally fit into and can enrich that culture, to resist those things that are truly alien and to compartmentalize those things that, while different, can nevertheless be enjoyed and celebrated as different." A structural shift in information flow, Web 2.0 is about glocalization, it is about making global information available to local social contexts and giving people the flexibility to find, organize, share and create information in a locally meaningful fashion that is globally accessible.

Conceptually Local: Combining globalization and localization, the coined-term Glocalization proposes both theory and practice for bridging scales in an alternative equitable international system, using a mosaic of committed key actors, including a full range of local, national, international, public, private, and nonprofit entities. The meaning of globally accessible information becomes organized in its local context. It means unpredictaly doing more than we know.

Glocalization is a potential movement, a peace-building activity combining realism and idealism. It is a bottom-up view of the complex process of harmonizing local and global needs for sustainable futures. It brings globalization issues down to the human scale.

The basis of our technology is moving from a mechanistic to a negentropic paradigm. The most important thing happening today is a metamorphosis of human life: hyperchange, the cybernetic revolution, the biotech revolution. Business as usual is nonsustainable and cannot continue unchecked. We need a Plan B for human survival. Negentropy is arguably our greatest hope for a sustainable future rooted in HUMAN SURVIVAL TECHNOLOGIES, which doesn't mean that "technology will save us". It both creates and solves problems.

Unique physics governs matter at the nanoscale. Soon "reality chips" will put themselves and us together and culture will be revolutionized. Bioart, tweeking genetics and physical structure, is the medium of the 21st century -- 3-dimensional designing and engineering of new bodies and environments. Probably more than a million people living today were conceived in petri dishes.

Bioart is an aesthetic response to biotechnology (meta-biology). We are in a transhuman transition era we call the Information Age. Direct Brain Interface is coming soon. Quantum dots can already merge with nerves. Information is more fundamental than matter, controlling and patterning randomness; it makes matter matter.

We are heading toward an Age of Wonder, including synthetic or virtual worlds which will supersede the real world in many ways. Synthetic reality will compete for our attention. Supertrends shape the future: technological progress, economic growth, improving health, increasing mobility, environmental decline, extreme weather, and increasing culture shock.

Physics has jumped its classical boundaries, making a quantum leap from the domain of matter/energy to the more fundamental scale of the vacuum potential underlying field phenomena. We now consider our fundamental nature not only through biochemistry but through our energy body, living our wave-nature as well as particle-nature. The biophysical role of underlying EM fields can be demonstrated in energy medicine, quantum mechanics and field theory.

The energy body is our fundamental nature. Our consciousness has jumped out of our meatbody through technological extension; we've gone global. An analogous creative current informs ART that jumps the canvas into digital multimedia, including webart. Healing has jumped the consulting room into nonlocality and virtuality as global distance becomes a less and less meaningful barrier.

Technology is shaping us for better or worse, boon or bane. We need to maintain human compassion for ourselves and one another to counteract such trends. Our humanity hangs in the balance.